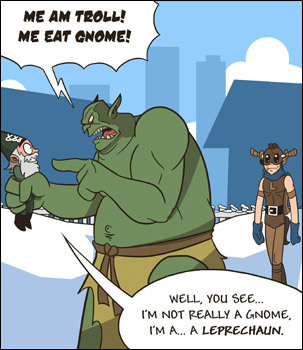 Roy: I'll take on the archers. Haley, V: slow down that wizard!
Haley: She's a sorcerer, actually.
Vaarsuvius: Technically, a sorceress.
Roy: Wow, I can't tell you how much more fulfilling this battle will be now that I can refer to my enemy by the proper appellation. Now stop wasting time and get moving!
Haley: Relax, speaking is a free action.
— The Order of the Stick, "Wolverine, Eat Your Heart Out"

It's pretty common to make mistakes when trying to communicate so it's not rare to see characters stop to disambiguate their meaning to avoid confusion. What is unusual is when they do it in the middle of a fight to the death, and their enemies politely stop to listen.

This is a kind of Non Sequitur where a character, usually in the prelude to or middle of a serious (if not deadly) situation takes a time out to clarify that what he really meant to say was X. Expect it to escalate into an inane conversation on the subtle differences and various interpretations of X as opposed to Y, or XYZ rather than ZYX.

Once the character's Distracting Disambiguation is over, expect everyone to go right back to the critically dangerous situation as if nothing had happened.