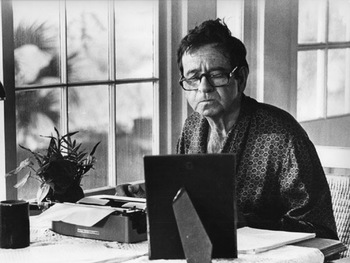 The most dangerous man in the world.
"He actually has the balls to hide out in my house!"
Advertisement:

A 1980 adaptation of the Brian Garfield novel of the same name, co-written by the original author and directed by Ronald Neame.

This Cold War-era espionage comedy stars Walter Matthau as Miles Kendig, a CIA field agent who is Kicked Upstairs after refusing to terminate his KGB counterpart, an affable operator named Yaskov (Herbert Lom). His boss, Myerson (Ned Beatty), is the immature bureaucrat who does the kicking — and screaming.

Rather than ride a desk for the next few years, Kendig decides to write and publish his memoirs, including thirty years' worth of embarrassing state secrets. Aided by his lover Isobel (Glenda Jackson) and hunted by his protégé Joe Cutter (Sam Waterston), Kendig skips around the globe as both the CIA and KGB race to apprehend him... or kill him.