Film / The Legend of Billie Jean 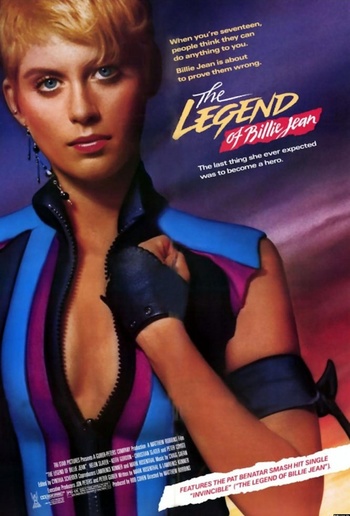 "We didn't start this, we didn't mean it to happen, but we're not givin' up til you pay. Fair is fair!!!"
"Fair is fair!"
Advertisement:

The Legend of Billie Jean is a 1985 film starring Helen Slater and Christian Slater (no relation in real life), about a small group of teens from Corpus Christi, Texas, who become outlaws after they are accused of attempted murder.

The trouble starts when Billie Jean and her brother Binx get into a squabble with a local bully, Hubie Pyatt. Hubie escalates the war by beating up Binx and vandalizing his motor scooter. When Billie Jean goes to seek reimbursement from Hubie's father, a local businessman, the sleazy Mr. Pyatt instead attempts to rape her; and, in the process of trying to rescue her, Binx accidentally shoots him.

Now the siblings, along with their friends Putter and Ophelia, are on the run from the law, as Mr. Pyatt quickly sics the cops (who had previously refused to pursue the vandalism) on them. While on the lam, they meet Lloyd, the son of the District Attorney, who chooses to join them as a "hostage". At this point Billie Jean, inspired by an old movie about Joan Of Arc, cuts her hair, changes her whole persona and begins making her own demands for justice. But can a bunch of kids really stand up to the long arm of the law?