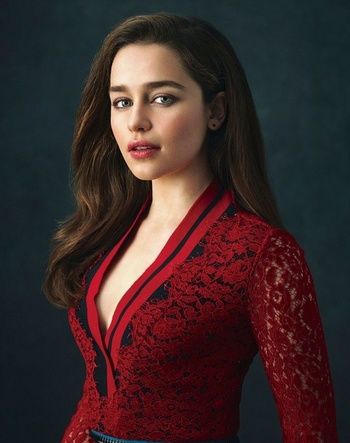 Anonymity suits you well, your Grace.
"You can't come out of drama school and think, 'It's all going to be amazing.' You have to expect to work in a bar for at least five years and be a waitress for maybe two!"
Advertisement:

Clarke was born in London and grew up in Berkshire with her parents and younger brother. Her father is a theatre sound engineer, and her mother a businesswoman. Clarke's interest in acting began at the age of three after seeing the musical Show Boat, on which her father was working at the time. She was educated at St Edward's School, Oxford from 2000 to 2005 and at Rye St Antony School. She then studied at Drama Centre London, graduating in 2009.

Clarke's early work includes two plays at St. Edwards, ten plays at Drama Centre London, the 2009 Company of Angels production of Sense, and a 2009 commercial for the Samaritans. Her first television roles were Saskia Mayer in a 2009 episode of Doctors and Savannah in Syfy's 2010 film Triassic Attack. Screen International magazine named her as one of the "UK Stars of Tomorrow".

In 2010, Clarke was cast as Daenerys Targaryen in the HBO series Game of Thrones, which is based on the book series A Song of Ice and Fire by George R. R. Martin. She was cast after fellow British actress Tamzin Merchant was replaced for undisclosed reasons. The show debuted in April 2011 to universally positive reviews and was quickly picked up by the network for a second season. Clarke won the 2011 EWwy Award for Best Supporting Actress in a Drama for her role as Daenerys. In 2013, she was nominated for Outstanding Supporting Actress in a Drama Series at the 65th Primetime Emmy Awards. She was also voted the most desirable woman in the world by Askmen readers in 2014.

In 2012, Clarke appeared in Spike Island, a film named after the location of The Stone Roses' seminal 1990 gig. From March to April 2013, Clarke played Holly Golightly in a Broadway production of Breakfast at Tiffany's. In May, it was announced that she had joined the feature film Garden of Last Days. In July 2015, Clarke played Sarah Connor in Terminator Genisys — speaking of which, she is not related to Jason Clarke. In 2016, she appeared in the romantic drama Me Before You, in 2017, she starred in the psychological thriller Voice from the Stone, and in 2018 she starred in Solo as Han's First Love, Qi'ra.

She also co-wrote the comic M.O.M: Mother of Madness, of which the first issue was released in July 2021.

Tropes Relating to Her Career: