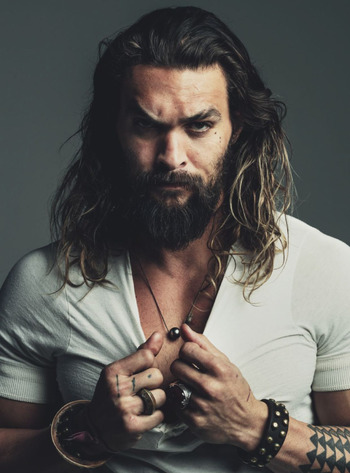 "I love life and if there's something that I'm playing that I love, I'll research it."
Advertisement:

He's known for playing a lot of warrior types such as Khal Drogo of Game of Thrones, Ronon Dex of Stargate Atlantis and Conan the Barbarian. He struggled for a while until he was chosen by Zack Snyder to play Aquaman in the DC Extended Universe, and his 2018 solo movie (the highest grossing of that franchise) as the character made him a bankable star.

Momoa's also been getting more into the indie flick scene, directing, writing, and sometimes costarring beside his wife, actress Lisa Bonet (who's been his Celebrity Crush since he was a kid), who played Denise Huxtable Kendall in The Cosby Show. Bonet is also the mother of Zoë Kravitz, making Momoa her stepfather. Momoa and Bonet also have a son and daughter together.

Explaining TV on a TV show

Example of:
Leaning on the Fourth Wall

Explaining TV on a TV show