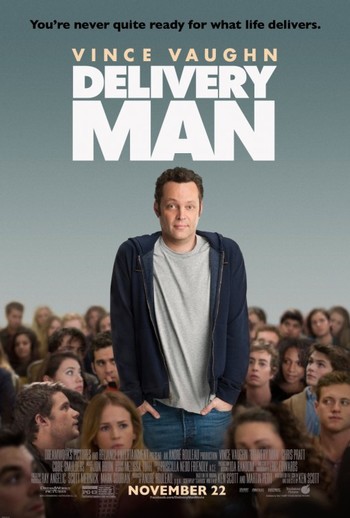 Delivery Man is a 2013 American comedy-drama film directed by Ken Scott and starring Vince Vaughn, Chris Pratt, and Cobie Smulders. It is a remake of Scott's 2011 French-Canadian film, Starbuck.

David Wozniak (Vaughn) is a hapless deliveryman for his family's butcher shop, whose girlfriend Emma (Smulders), an NYPD officer, is pregnant with his child. One day, David returns from work to find a lawyer representing a sperm bank where he gave donations during his student years, who tells him that he has fathered 533 children through his samples, and that of those, 142 have joined a class action lawsuit to force the fertility clinic to reveal the identity of "Starbuck", the alias he had used.

David's friend and lawyer Brett (Pratt) represents him as he tries to keep the records sealed, but David starts to have second thoughts about it.