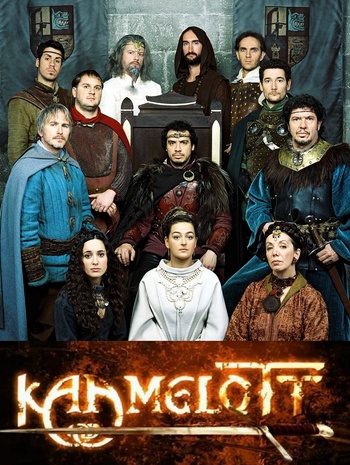 Yes, it does look like a serious Period Piece... until you hear the dialogues.note From left to right, top: Yvain, Karadoc, Merlin, Father Blaise, Lancelot, Bohort; center: Perceval, King Arthur, Léodagan; bottom: Démetra, Guenièvre, Séli.
"Seigneur, je me vouerai tout entier à la noble quête dont Vous m'honorâtes. Mais avec l'équipe de romanos que je me promène, on n'est pas sorti des ronces."translation "Lord, I will devote myself entirely to the noble quest which You honored me with. But with the team of dumbasses I'm lugging, we're not out of the brambles yet."
— King Arthur
Advertisement:

Kaamelott is a French comedy series inspired by the Arthurian Legend that originally replaced another successful comedy series, Caméra Café, but soon became even more popular. It was created and written by Alexandre Astier (who also plays the main role, that of King Arthur) and broadcast on French channel M6 since 2004.

The show's four first seasons (called "Livres", French for "Books") were composed of short episodes (about 3 and a half minutes each). The early seasons consisted of humorous depictions of daily life at King Arthur's court and of the knights' ineffective quest for the Holy Grail in Dark Age Europe; but as the author grew more self-confident, it got spiced by more and more continuity (including Retcon at some point) and half-serious story arcs. Book V then had longer episodes (7 minutes) and a Darker and Edgier tone. Book VI aired in October 2009; it is a prequel season depicting Arthur's youth in Ancient Rome and was partly filmed using the sets built for HBO's Rome in Cinecittà.

Astier planned a trilogy of sequel theatrical films to conclude the story. The project was stuck in Development Hell from 2010 to 2019. The first of the films, Kaamelott: Premier Volet, eventually came out on July 21, 2021. Following its release, Astier said he would like to explore the events that happened during the ten year long Time Skip between the end of the series and the first film, an installment potentially titled Kaamelott: Resistance, but he hasn't decided on which kind of media he'll do it yet.

Has a character sheet and a Recap page.