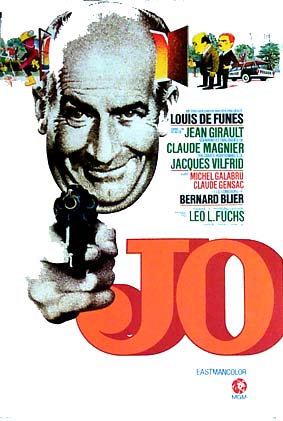 Louis de Funès is about to shoot you.
Advertisement:

Jo is a French Black Comedy film released in 1971. It is also known in English-language territories either as Joe: The Busy Body or The Gazebo. It is the second adaptation of the play The Gazebo by Alec Coppel and Myra Coppel. It was directed by Jean Girault and stars Louis de Funès, Claude Gensac, Bernard Blier, Michel Galabru, Guy Tréjean and Ferdy Mayne.

Antoine Brisebard (De Funès), a famous playwright, is struggling with financial difficulties and is preparing to sell his country villa to an English couple, the Grunders. What no one knows, however, is that Brisebard is actually a victim of blackmail since his wife Sylvie (Claude Gensac), a famous actress, is the daughter of a notorious robber-murderer. The malevolent is a criminal extortionist only known as "Monsieur Jo", who visits him often to pick up his hush money.

But faced with certain ruin, Brisebard is preparing to do away with Jo once and for all, planning his deed under the guise of him trying to write the script for a crime play and consulting his friend, attorney Colas, for ideas of how to efficiently get rid of the body. He finally takes up the offer of one Tonelotti (Michel Galabru) to erect a gazebo (garden pavilion), as its foundation would provide the ideal hiding place for the corpse.

Things will not really work as planned for Brisebard...

Not be confused with the French television series Jo.