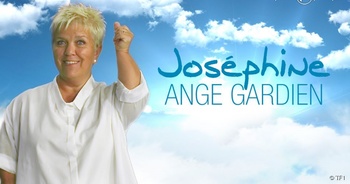 Joséphine, ange gardien (Joséphine, Guardian Angel) is a French television series (produced with Belgium and Switzerland) about a guardian angel called Joséphine who is sent from Heavens to the human world in order to help people. In each episode, she is given a special mission where she needs to fix a specific problem between some persons. She has magical powers but she is not allowed to use them too often, and has to rely mainly on psychology and generosity to take care of situations.

The series started in 1997, and shows no sign of stopping. Joséphine is played by French actress Mimi Mathie, who has dwarfism (she is 4 ft. 3 in. tall).