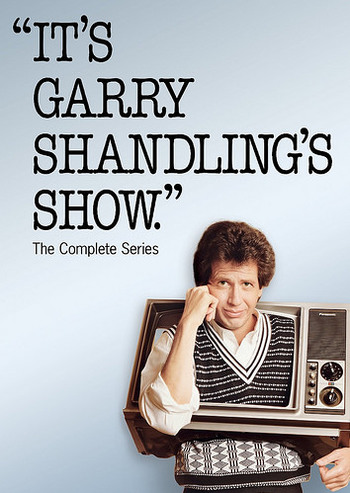 It's Garry Shandling's Show was a late-1980s comedy on Showtime (which would later be rebroadcast on Fox) that turned No Fourth Wall into an art form. Comedian Garry Shandling played comedian Garry Shandling, who not only knew he lived inside a sitcom, but had a Studio Audience "inside" his house. (Sometimes their presence there waiting for him would surprise him when he first came out of his bedroom in the morning.) Garry's visitors, friends and neighbors, while not possessing studio audiences of their own, were all aware of his, and everyone made a point of addressing the audience at some point in the show.

The entire point of the show, around which almost all of its plots revolved, was deconstructing, subverting and inverting all the standard tropes of broadcast television sitcoms. In any given episode, Garry would have a monologue to set up whatever the standard sitcom plot of the week is, talk directly to the audience mid-scene (which the other cast members rarely acknowledged), and even change scenes by walking off one set and directly onto the next one. This total lack of regard for the fourth wall, the conventions of sitcoms, and even the show in and of itself, was pretty unusual and strikingly postmodern for the straight-faced 80s. Considering that writers for this show went on to work on The Simpsons and Seinfeld, one could say that this show was quite a few years ahead of its time.

Shandling would later use similar methods to skewer late night television with The Larry Sanders Show.