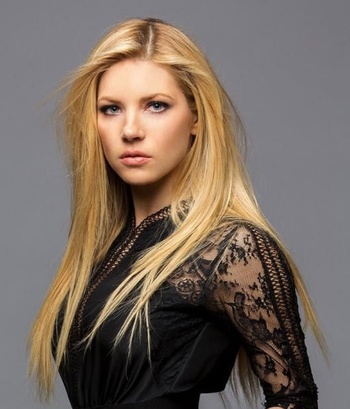 Katheryn Winnick (born Katerena Anna Vinitska on December 17, 1977 in Etobicoke, Ontario) is a Canadian actress of Ukraininan descent. She spoke Ukrainian as her first language until she was 8 years old, when she began speaking English.

She began training in martial arts at a very early age and by the time she was 21 she had already started three martial arts schools. Eventually she was brought in to help train actors in martial arts for fight scenes and she decided to go into acting.

Her most well-known roles have been in television, playing Hannah Burley, Booth’s girlfriend in season 6 of Bones, and the lead role of the legendary shield maiden Lagertha in The History Channel's Vikings.

Tropes that appear frequently in her works