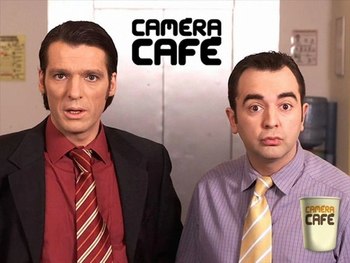 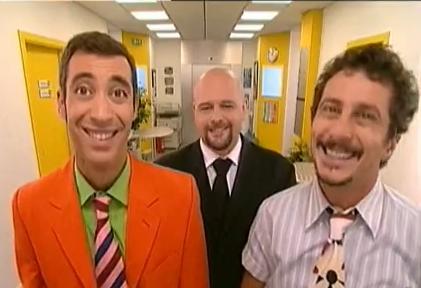 Italian version - From left to right, Paolo, Andrea and Luca. Paolo and Luca try to smile as Andrea (in the middle) prepares to do what he does best.
Paolo: "Pippo, weren't ya goin' to the bathroom?"
Pippo: "But I..."
Paolo: "GO TO THE BATHROOM!"
Pippo: "GOING RIGHT NOW!"
[cue Girly Run, as always]
Advertisement:

A French sketch comedy series which spawned more than a dozen adaptations around the world, punny-named so because "Caméra Cachée" is French for Candid Camera. The original French series lasted from September, 2001 to December, 2003. A number of the adaptation were still ongoing as of 2011.

It basically involves a fixed camera, installed in a coffee vending machine. Said vending machine is inside a corridor within a company with No Name Given, next to a heavily dysfunctional office.

The camera never moves unless in cases of Camera Abuse (which happen a lot), all while accurately filming the employees' quirky habits.

But what could possibly happen in the relax area, to deserve enough interest to install a camera in a coffee vending machine?

This series, sadly, has never been re-done in English. However this doesn't mean we can't list some tropes here. The series concept has however been sold across many countries, who have copied or made their own scripts based on the concept. The Quebec version, for examples, features a gender-neutral bathroom door in the room where the coffee machine is, allowing for other situations.

A character sheet (also about the Italian version) is under construction, although the most characters have essentially already been covered by now. Pictures about minor characters - or even one-time guest stars - are not strictly required, but still welcome nonetheless.

This series (the names listed come from the Italian version) provides example of: