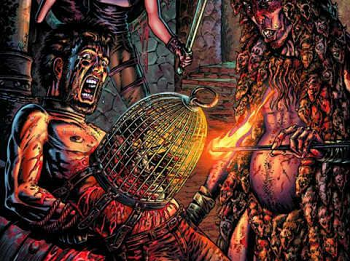 Sometimes a Torture Technician isn't content with the usual types of sharp, blunt or other torture implements. Sometimes they decide to employ living creatures to cause pain or terrify the hapless victim.

Insects and spiders are the most frequent creatures used, and there is a certain logic to it. Many people are afraid of creepy-crawly things, and just the feeling of the creatures crawling over the skin can be enough to terrify them. Alternately, the creatures may be the type that bite or sting, inflicting many shallow but painful wounds over a prolonged period of time without killing the victim. Many of these creatures are also venomous or poisonous, and that can cause effects of its own, provided the toxin isn't potent enough to kill or the victim isn't allergic.

Occasionally, other creatures can show up as well. Deliberately keeping them hungry so they'll be inclined to attack more aggressively or, in either case, commanding them with some form of Mind Control may figure in.

Compare Fed to the Beast and Snake Pit, which usually involves larger creatures and Eaten Alive, as well as Animal Assassin, where the animal is not used for torture but as a murder weapon. If it's a harmless prank rather than being used to mutilate someone, see Squirrels in My Pants.