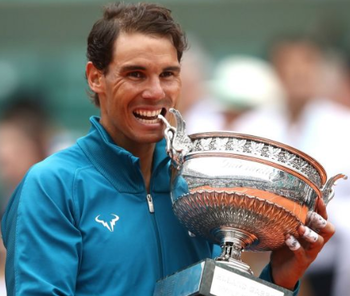 Rafael "Rafa" Nadal Parera (born June 3, 1986) is a Spanish tennis player who's well-known as the "King of Clay" who rules clay courts, the "Raging Bull" who fights unceasingly from the first point to the last, and one of the greatest male tennis players of all time.

Nadal won his first Grand Slam at the 2005 French Open when he was just 19 years old and he quickly established himself as nigh-invulnerable on clay, going on a record-setting streak of 81 matches won on clay from 2005-07. He also established himself as Roger Federer's friendly archrival, beating the otherwise nigh-untouchable World No. 1 Federer in four straight French Opens and handing him his sole loss at the Grand Slams in both 2006 and 2007.

It took a longer time for Nadal to establish himself as a major force on non-clay surfaces, but he first solved the grass-court puzzle at Wimbledon when he beat Federer in a classic 5-setter in the 2008 Wimbledon final to win his first non-clay Slam and ascend to the No. 1 ranking later that year. He then solved the hard-court puzzle too by beating Federer (again) in the 2009 Australian Open final despite having played another classic 5-setter against his countryman Fernando Verdasco in the semifinals that caused many pundits to think he'd be too exhausted to play Federer afterwards. (He wasn't.)

Nadal's career since then — and in general — has been a constant tango of his main rivals Roger Federer and Novak Djokovic seeming to overtake him (ex: losing the French Open and No. 1 ranking to Federer in 2009, losing 6 finals in a row and the No. 1 ranking to Djokovic in 2011), him mounting a determined comeback to regain the mental edge on them (ex: regaining the No. 1 ranking and winning 3 Grand Slams in 2010, regaining the No. 1 ranking and winning 2 Slams in 2013), and then having to repeat the process all over again after yet another injury to his body and/or resurgence from his rivals. Despite fears as early as 2005 that his grueling style of play would prematurely end his career with injuries, however, he has rebounded from every setback thrown at him and continues to be one of the toughest outs on the men's tennis tour in his 30s.

It also truly cannot be understated just how insanely dominant Nadal has been on clay: he has won the French Open a record 12 times — more than any other player has won any Slam — and lost only twice there since 2004 (not counting an injury-induced withdrawal in 2016), a record total of 58 clay titles, and the best-ever winning percentage on clay of over 90%, along with a plethora of other clay-court records. And that's not even getting into his other remarkable achievements, such as achieving the Career Golden Slam by winning all four Slams and Olympic gold and being the only man in the Open Era to win three Slams on three different surfaces in the same year (2010).