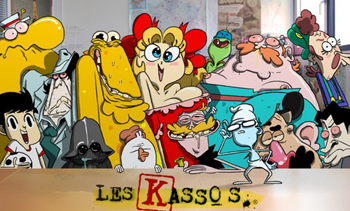 Les Kassos (The Wakos in English) is a French animated web series created by Balak (one of the guys behind Lastman), released on YouTube in December 2013, Accessible outside of North America if you have a different browser that doesn't allow any foreign videos outside of your country.

The series is about a social worker who just happens to take care of a wide array of parodies of fictional characters, from every sort of medias. Hilarity Ensues. The shorts typically takes the form of said characters being received as appointments in said social worker's office and describing her their problems.

An English dub titled The Wakos was available on Vice in the United States, but has been taken down for unknown reasons.