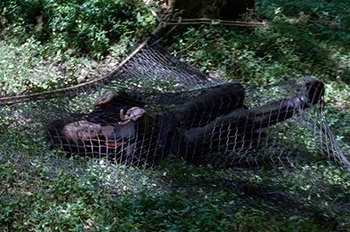 No! An easily escapable net!

Want to incapacitate somebody without killing them? Then the most foolproof way of pulling this off is with the Inescapable Net, which is exactly what it sounds like. It's a net that, when thrown over someone, causes them to just flail around helplessly, trapped like a bunch of fish, ready to start dying.

This trope is particularly popular in children's animation, where the intended audience usually just accepts the application of this trope without considering the general silliness of the idea. Suffice to say, this trope is much more difficult to pull off in live action television, in which the participants usually just end up looking silly.

To some extent this is Truth in Television. Animals surprised by nets usually don't have enough time to figure out a way to get out of it before the hunter is able to incapacitate them permanently. Of course, anything that is substantially stronger, smarter or with more escape time than your typical hunted animal doesn't have this excuse. Sometimes, however, heavy weights will be added to the edges of a net to make it more difficult to escape from, or the corners will be attached to long ropes to drag the captured target away. Even without the weights, some nets are just so heavy by themselves that they require several men to carry around as seen in nets used by commercial fisherman which are strong enough to carry hundreds of fish in one catch. Also, as the method they are often portrayed in fiction is used in traps, just the gravity alone is enough to bring an impact equivalent to getting hit even if the net is not heavy as seen in net guns used by policemen. And some nets are designed to tangle people with their holes to make it more difficult to escape despite weighing less than a pound.

See also All Webbed Up and Net Gun.