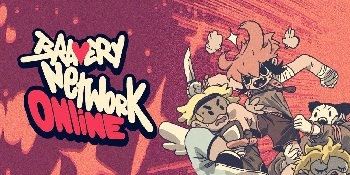 Seyla, restrained by her allies.
Bravery Network Online is a Turn-Based Combat RPG with an emphasis on Player Versus Player battles, developed and published by GLOAM. The game released in Early Access for PC on February 16, 2021. The official Twitter page for the game is located here

The game has you in the future world of Tower 6, competing in the ultimate sport: Bravery. Technology has made resource scarcity a thing of the past, and the citizens lovingly battle each other to stay plugged in. You play as their coach, trying your best to make sure your fighters are confident and focusing on what'll help them win!