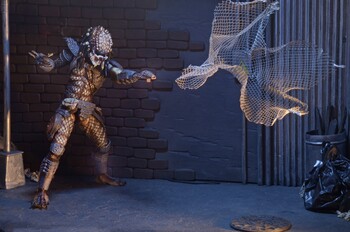 The archetypal non-laser (possibly even low-tech) type of Family-Friendly Firearms, the net gun is a thing which actually exists

, though in reality they're not useful for much beyond catching comparatively small birds (or, more recently, drones). This is because real nets tend to be heavy and bulky, and it's very hard to pack a net capable of covering a target of any respectable size into a projectile with any amount of range. But in fiction, the net gun can capture a full-sized person or more, and may fire an Inescapable Net. It may be a component of a Swiss Army Gun. Sister trope to Projectile Webbing.