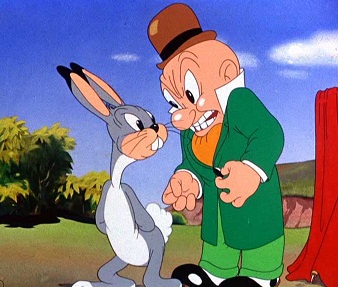 "Perhaps the kindest thing to say about Elmer's Candid Camera is that it taught everyone what not to do and how not to do it."
— Charles M. Jones' thoughts on the film, in "Chuck Amuck: The Life and Times of an Animated Cartoonist".
Advertisement:

"Elmer's Candid Camera" is a 1940 Merrie Melodies short, directed by Charles M. Jones. It is the official debut of Elmer Fudd note Egghead, his prototype, notwithstanding and features an early prototype of Bugs Bunny (retroactively named Happy Rabbit).

The plot is centered on Elmer Fudd as he goes out to photograph wildlife with the eponymous camera. During his travels, he encounters a pudgy gray rabbit, who, for no discernable reason, decides to pester Elmer.

As the opening quote states, the short was a total flop, and became regarded as an Old Shame by Chuck Jones. Tex Avery soon after did a remake of the cartoon, improving on its perceived flaws, called A Wild Hare.