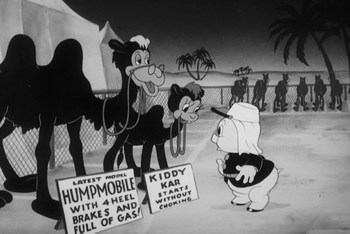 Porky Pig is out working for the French Foreign Legion in the Sahara Desert, strutting and singing to The Girlfriend of a Whirling Dervish outside of a bar when he abruptly meets an informant, who sends on a mission to stop the attacks of Ali Baba and his troops from attacking a nearby fortress.