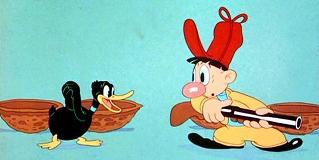 Two Nuts For The Price of One.

The one short that practically kicked off the Screwball Squirrel-type cartoon, "Fred" Avery's "Daffy Duck and Egghead", a Merrie Melodies short from January 1, 1938, while not the first in which Daffy Duck appears, is the first one in which Daffy is named, the first one in which Elmer Fudd (or rather, a prototypical version of him named Egghead) goes hunting, and the prime example of early Daffy Duck at his daffiest. Full of great gags, a song from Daffy and perfect pacing, it's a classic short to behold.

Tropes Used in This Short: