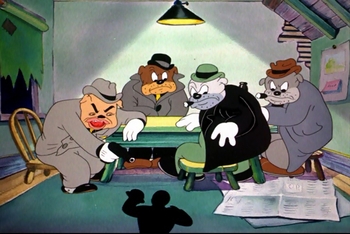 "Well, you sit right back down there till this thing's over, see?"
Advertisement:

Thugs With Dirty Mugs is a 1939 Merrie Melodies cartoon, directed by Tex Avery.

The cartoon is a parody of gangster movies, with the title itself being a reference to a 1938 film Angels with Dirty Faces, made by Warner Bros. themselves.