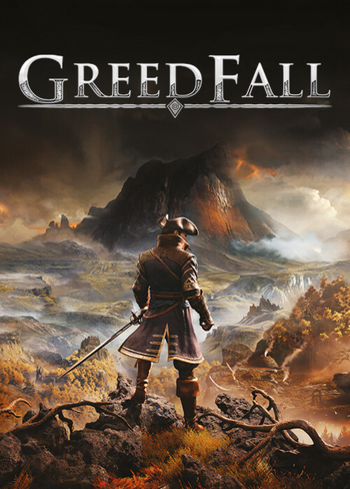 GreedFall is a Role-Playing Game from the French developer Spiders, released on September 10, 2019 for PC, Playstation 4, Playstation 5, Xbox One, and Xbox Series X|S.

The protagonist is from a continent resembling 17th-century Europe in its technological advancement, but where magic also exists side-by-side with cannons and rifles. Currently, it is in the grip of a terrible, incurable plague named Malichor. However, a newly discovered island named Teer Fradee is free of it, and it's suggested a cure may be found there. Thus, multiple factions of The Old World send out their colonizing fleets. You play as De Sardet, a representative of the Congregation of Merchants and the cousin of Constantin D’Orsay, who is set to become the Governor of Congregation's newest colony, New Serene. You, on the other hand, will be in charge of finding the cure.

Of course, the Congregation isn't the only faction with an eye on Teer Fradee: On one side is the science-minded Bridge Alliance, who see the island as a wellspring of knowledge and resources that can be harvested to cure the Malichor. On the other side are the Thélème, a nation ruled by magic who believe the Malichor to be a demonic curse that can only be cured by destroying the island's "demons" and bringing their monotheistic religion to its native inhabitants — by force if necessary. All three nations are keenly aware that the other factions are just as intent upon finding the cure as they are, and will also grab as much territory and resources along the way as they can get away with. Moreover, the natives of Teer Fradee are obviously not impressed by this mass invasion. While some attempt to negotiate what they can with the factions like yours that are averse to unnecessary bloodshed, others resist, often with the help of the supernatural creatures they have bonded with. However, as impressive as those are in singular engagements, they remain a poor counter to the firepower of massed ranks of trained musketeers.

While the frictions are definitely concerning, you're more worried about your cousin, who is over his head almost as soon as he steps off the boat. As you work towards establishing some semblance of order and stability to New Serene, however, you begin seeing signs that you have more in common with the natives than originally thought...

This being an RPG, you have a large degree of choice in how you approach the characters of this world, and the quests they may ask you to fulfill.

A "Gold Edition" was released on June 30, 2021 for the PlayStation 5 and the Xbox Series X|S, along with a new expansion "The De Vespe Conspiracy", which adds a new explorable area, a bunch of unique items, and a short sidequest starring Aurelia De Vespe — an ambitious young noble from a rival family seeking to undermine the D'Orsay and De Sardet.

The reveal teaser is here

, and the gameplay demo video is here