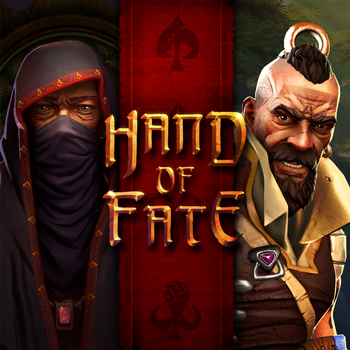 Beyond the thirteen gates at the end of the world, the game of life and death is played. Adventurers who face the immortal Dealer must re-live encounters from their past, and fight the deadliest monsters in his service.
Advertisement:

Hand of Fate is a unique mix of Hack and Slash, Roguelike and Deckbuilding Game. At the start of each adventure, you get the chance to customize two decks, one containing all the treasure you'll be able to earn, and the other describing the encounters you'll have to face along the way. Upon entering a combat encounter, all of the cards the player has collected fly into their hands as fully modeled 3D assets, and combat begins. From there, most of the game will be spent staring down the dealer from the other side of a maze made of the encounter cards, moving a miniature representing yourself from quest to quest, watching them slowly gain better weapons and armor, and quickly lose health and supplies. The aim of it all is to seek out and defeat all of the face cards (Jack, Queen, and King) of the deck's four suits: Dust, Skulls, Plague, and Scales. Each waits at the bottom of a dungeon, represented by a new game with the Dealer. The rules of each game change to favor each of the bosses.

Hand of Fate was developed by the Australian studio Defiant Development, and was released in February 2015. A sequel, Hand of Fate 2, was released in November 2017. Set a hundred years after the Dealer's defeat at the end of the original, it features his return among the living in search of revenge, taking a new adventurer through scenarios based on his (or her!) deeds to prepare them for the final battle their carriage inexorably approaches. The sequel features more overworld puzzles, selectable companions, an improved combat and weapon system, and multiple adventures with their own mechanics.

He also indicates that the player may have free will, but he himself does not.
All the world is a game, and us men and women merely players. I alone do not play — I maintain the rules. You have choices, and I have predestination. Your choices, though, are merely a rediscovery of that which you already know.