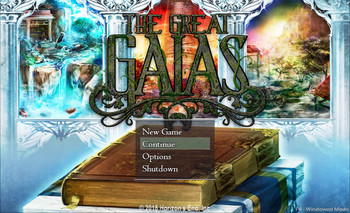 The Great Gaias is a RPG Maker MV game developed by Horizon's End, based on a Dungeons & Dragons campaign that the team wrote. It was fully released on Steam in 2018.
Advertisement:

The world of Tenat was created by several elemental deities and is home to several races. In the past, the Validian Empire attempted to exterminate elvenkind, but its immortal emperor, Grindelwald Maultor, was sealed away by an alliance known as the Warriors of Light. The warriors went on to establish other nations and scatter the pieces of the keystone to prevent its power from being misused. In the present, the reincarnations of the Warriors of Light and their allies are tasked with protecting the keystone pieces from the revived servants of Maultor, but can they really fill their predecessor's shoes?