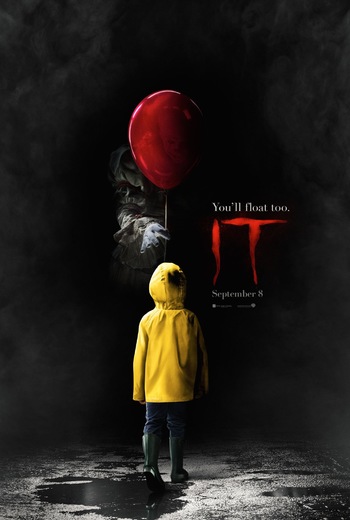 "We all float down here..."
"Derry's not like any town I've ever been in before. People die or disappear six times the national average. And that's just grown ups. Kids are worse. Way, way worse."
— Ben Hanscom
Advertisement:

It (a.k.a. It: Chapter One) is a 2017 supernatural horror film directed by Andrés Muschietti and written by Chase Palmer, Cary Fukunaga and Gary Dauberman, and the first of a two-part adaptation of Stephen King's classic 1986 horror novel of the same name. The film tells the story of seven children as they are terrorized by the eponymous being, which exploits the fears and phobias of its victims in order to disguise itself while hunting its prey. The film depicts roughly half the book, focusing on most of the childhood events of the main characters.

Set in 1989 in the fictional town of Derry, Maine, the story begins when a young boy named George "Georgie" Denbrough disappears after the sudden arrival of a mysterious clown named Pennywise. Georgie's older brother, Bill, is left distraught by his disappearance, and after an encounter with Pennywise, looks for the help of six other outcasts who have had similar encounters with the clown and its other forms. The seven work together to examine the behavior of this shapeshifting creature — which they dub "IT" — and see if they can rescue Bill's missing brother at the same time.

The movie is an adaptation of the parts of the novel that are about the Losers as children and was released on September 8, 2017. A sequel, It: Chapter Two, based on the parts of the novel about the Losers in adulthood (with flashbacks to their childhood), was released on September 6, 2019. A prequel series for HBO Max was announced in March 2022, under the title Welcome to Derry.

Alternative Title(s): It Chapter One