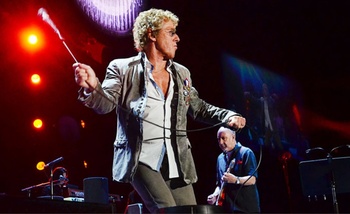 Performing on stage, be it as a musician, a comedian or a host of a program, can be pretty fun, and in this moment of fun, the performer may taken it upon themselves to swing around the microphone either in front of them or over their heads. Do it right, it can be pretty cool. Do it wrong, you just look awkward or foolish by potentially damaging an expensive piece of technology. For added humor, someone could swing the mic and it accidentally hits someone else.

This has been seen in individuals who do to show that they are cocky, fancy or just dramatic. Plenty of times, you'll see a flamboyant or otherwise spirited character engage in this behavior and it's additionally seen as a sign of being comfortable with their performance and/or the audience.

Keep in mind that while swinging a microphone is usually done with the cord and is the most popular example of this trope, other variations can be done. This includes swinging the microphone by the handle instead (example being in a golf club swing action) or even playing with the microphone stand while the mic in still in it, be it just swaying along or even dancing with it.

Closely related to Mic Drop. Unfortunately, this is falling out of practice (but isn't completely gone) due to liability-related issues and just being seen as an odd antic or quirk of yesteryear, although if someone has a signature of doing this, like Roger Daltrey, then it's to be expected. Additionally, it's increasingly common for artists to use cordless microphones to allow more dynamic performances without risking getting the cords tangled.