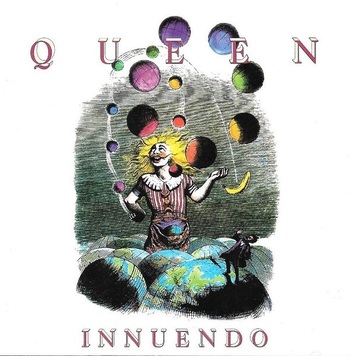 Through the sorrow all through our splendor, don't take offence at my innuendo...
Advertisement:

Innuendo is the fourteenth studio album by British Glam Rock band Queen, released in 1991, and the last both completed and released during lead singer Freddie Mercury's lifetime (Mercury attempted to record as much material for Made in Heaven as he could, but only managed to complete three songs before dying, leaving many others in fragments; much of the album was either recorded after the fact or cobbled together from outtakes and past solo material).

By this point, Mercury's death of AIDS was an all-too-clear inevitability, and as a result much of the album acts on a musing on his own rapidly-approaching mortality; so heavily was his health declining that the music videos for "I'm Going Slightly Mad" and "These Are the Days of Our Lives" were Deliberately Monochrome to obscure Mercury's gaunt appearance, and the latter featured him isolated to one spot with limited amounts of movement, because he no longer had the strength to perform as wildly as he was known for. Eventually, Mercury's health declined so heavily that he was unable to perform on-screen at all, leading to "The Show Must Go On" simply receiving a clip compilation rather than a proper music video. Nine months after the album's release, Mercury died from pneumonia exacerbated by AIDS; he only publicly disclosed his struggle with the latter the day before his death.

Sound-wise, Innuendo furthers the Revisiting the Roots approach of The Miracle immediately before, this time exploring a modernization of the Progressive Rock sound of Queen II, A Night at the Opera, and A Day at the Races. The band had already ceased live performances following Mercury's AIDS diagnosis, and consequently had unprecedented amounts of room for highly sophisticated production styles and song structures. Thus, Innuendo sees Queen producing and performing with levels of musical ambition not seen in 15 years, most heavily signified by the suitelike structure of its opening Title Track.

Innuendo produced five hit singles: "Innuendo", "Headlong", "I'm Going Slightly Mad", "The Show Must Go On" and "These Are the Days Of Our Lives".

The tropes must go on!