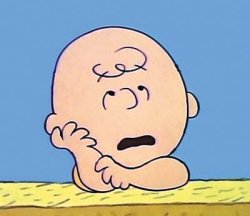 Some characters have outrageous, gravity defying hairdos. On the other hand, there are characters like this, with only two or three strands of hair. To a casual viewer, a character with Charlie Brown Baldness will appear, well, bald. However, the character may occasionally mention getting a haircut, or other characters will comment on said haircut or colour. The current Trope Namer is Charlie Brown, who, at first glance, appears bald save for a few short curls in front, but according to Word of God, just has incredibly light blond hair, buzzed short (as was a popular style for boys in the 40's and 50's). Keep in mind Charlie's father is a barber.

Contrast Furry Baldness, where an animal character is "bald" despite still having hair, feathers, or fur, and Prematurely Bald where a character is actually bald despite their young age.