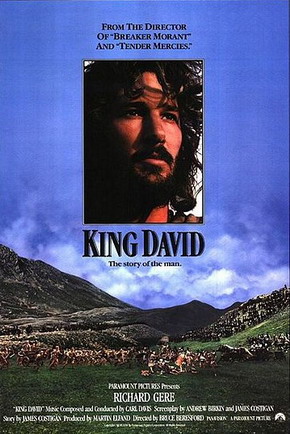 "Mark this above all: Be guided by the instincts of your own heart, no matter what the prophets tell you, for it is through the heart, and the heart alone, that God speaks to man."
— David
Advertisement:

King David is a 1985 Biblical film about the second king of Israel, David. It was directed by Bruce Beresford and stars Richard Gere, Edward Woodward, Alice Krige, Dennis Quilley, Niall Buggley, George Eastman, and Christopher Malcolm. It was filmed in Matera and Craco in Italy and at Pinewood Studios in England.

Designated as future king by the prophet Samuel, the young David defeats the menacing giant Goliath with his sling. However, King Saul, jealous of the new hero, wants to take his life.