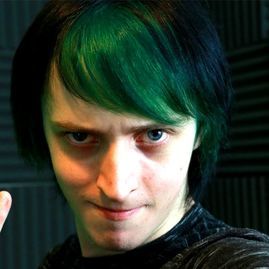 Press START to begin!
Hey buuuddies, it's Will of DAGames...
— Will
Advertisement:

DAGames (DA standing for "Diamond Armada") is a fairly known YouTube channel hosted primarily by its founder, Will Alex Ryan. The channel consists of various types of content including let's plays, animations, livestreams, and most notably music. Despite doing a variety of works, including original works, Will is most well-known for songs he has made for various popular franchises such as Five Nights at Freddy's and Bendy and the Ink Machine.

Will started off as an animator on Newgrounds, the Comix series and Reality series being his most notable on the site. After the migration to YouTube, he followed along and has stuck around ever since. Musicwise, Will has been making music for over 11 years now. With a fascination for rock and metal, he and a friend of his started a band known as Onyx Colony. After a couple of years the band split apart and Will began to make music under the alias of W.A.R., his initials. Eventually, he began to make music under the DAGames name, starting with It's Time to Die, a Five Nights at Freddy's 3 song. As for the let's plays, he kicked off his Let's Play career with Super Mario 3D World.

, a dystopian Science Fantasy story told through three albums of original music: Heart of an Artist (2018)note (released under the DAGames label, unlike the rest which are released under the IRIS label), Goliath’s Throne (2019), and the upcoming Dawn of the Dimetrix (2021).

, run mainly by Will and his friend Dexter Manning was launched on November 21, 2020.