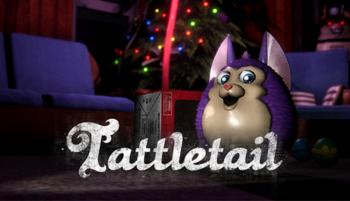 Me Tattletail! Me love you!
Advertisement:

Tattletail is an indie "virtual pet horror" game from Waygetter Electronics, created by Ben Esposito, Geneva Hodgson, and Tom Astle. It was released for PC through Steam on December 28th, 2016.

December 20, 1998: Unable to contain their excitement, a young child sneaks into the basement to peek at their Christmas presents... especially the hot new toy of the season, Talking Tattletail. This squat cartoon critter really talks, eats, and plays games with you, and with other Tattletail toys. After a night of fun, the child puts Tattletail away and goes back to bed, hoping their parents will be none the wiser...

But now that Tattletail has been let loose, he wants to have more fun with his new owner, whether they like it or not. The child will have to keep Tattletail fed, groomed, and fully-charged if they want to avoid the wrath of the sinister "Mama Tattletail"...

On May 9, 2017, the game got a "kaleidoscope" extension, which included an update and bug fixes.