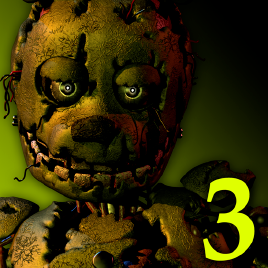 You will never be ready for Fr—wait, you're not Freddy...
"As always, remember to smile; you are the face of Freddy Fazbear's Pizza."
Advertisement:

Congratulations! Welcome to your new job as the security guard of "Fazbear's Fright", the newest and spookiest horror attraction in town! This haunted restaurant is based on the tales of that infamous "Freddy Fazbear's Pizza" place from nearly thirty years ago; it even features real artifacts recovered from the various pizzerias, which will help make this place a frightfully good time for the whole family.

The attraction opens in a week, so your job is to give things a test-run and make sure all that ancient wiring doesn't cause the building to burn down or something. Electricity concerns are so thirty years ago, and your handy-dandy terminal can reboot any system that happens to malfunction. You might want to make sure the ventilation system keeps chugging, since people have been known to hallucinate some crazy things when deprived of fresh air. We've also given you control of the audio system so you can create extra ambiance. Oh, and you can't spell "security guard" without "security", so you can seal off the vents to prevent any Air Vent Escapes.

Oh. And keep this close to your chest, but we might actually be able to get one of the original animatronics and have it installed before the place opens. How cool would that be? ...Wait, where are you going?

Much like the second game, teaser images for FNAF 3 began showing up on creator Scott Cawthon's website in the weeks before its reveal; these were followed by a brief-yet-frightening trailer

. The day after the game's release, Scott put up an image of Freddy Fazbear's hat sitting alone in a spotlight, which implied FNAF 3 was the Grand Finale of the series...

...until April 22nd, when the hat disappeared from the image. Five days later (of course), Scott officially announced the next installment in the series, Five Nights At Freddy's 4 (then reported to be the last game in the series, until it wasn't).