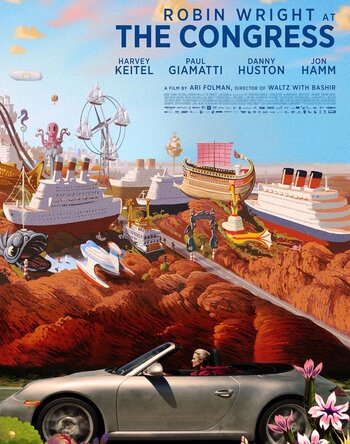 The Congress is a 2013 French-Israeli Science Fiction film loosely based on the Stanisław Lem novel The Futurological Congress. It is directed by Ari Folman and stars Robin Wright, who also co-produced. The film also stars Harvey Keitel, Danny Huston, Paul Giamatti, Jon Hamm, and Kodi Smit-McPhee in supporting roles.

Robin Wright plays herself as an actress whose fickleness and unpredictability ruined a very promising career and who is slowly aging out of her beauty. She is offered one last chance by Miramount Studios: they will buy the digital image rights from her in exchange for a large sum of money and a promise never to act again. Miramount will scan her body and expressions and be able to create a perfect digital version of Robin they can use on screen. With an ailing son to take care of and her career prospects vanishing, Robin agrees. Twenty years later the 'real' Robin attends the Futurological Congress as a guest, a Miramount presentation over their new drug that allows people to transform themselves into animated avatars, including Robin herself who has signed away the rights so that people can become her. The Congress takes place in an illusionary, animated universe that initially charms but quickly repels Robin. The film is half live action and half animated, representing the 'real' and 'chemical party' universes.