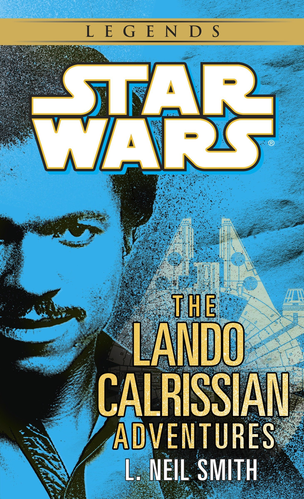 Take a chance. What's the worst that could happen?
Advertisement:

A trilogy of Star Wars prequel books by L. Neil Smith, now a part of the Star Wars Legends canon, relating... the adventures of Lando Calrissian. The three books, all following the Character Name and the Noun Phrase convention, are:

All three were published in 1983, one to five months after Return of the Jedi.

Lando Calrissian is a gambler, con artist and all-around rogue who has recently become the sole owner and captain of the Millennium Falcon. Which he has no idea how to pilot, or even maintain, so when he wins a piloting droid called Vuffi Raa in a card game, he leaps at the chance. There's only one problem: Vuffi Raa is the Rafa system, a brutal penal colony where prisoners have their intellect and vitality sucked out and transferred into life-crystals, which quadruple human life expectancy when worn regularly. Rafa is also home to the ruins of an ancient and vanished civilization advanced far beyond the Republic/Empire, the Sharu. It is whispered that the Sharu hid a great treasure in Rafa, a mystery Lando must solve when he comes to the attention of the system governor and a terrifying sorcerer.

So begins another Star Wars adventure.

They were wrong, those "experts". Lesai didn't stop you from caring. Lob Doluff wished it did.