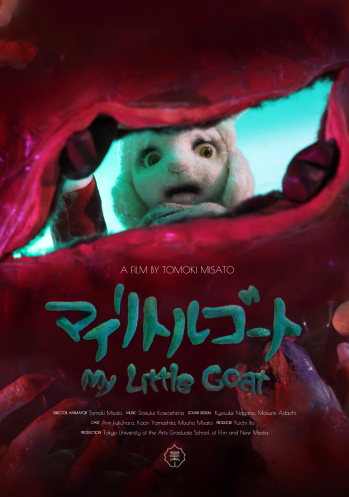 My Little Goat is a 2018 Stop Motion animated short from director Tomoki Misato, produced by the Tokyo University of the Arts.

A dark fantasy inspired by Grimm Fairy Tales, it is a modern retelling of The Wolf and the Seven Young Kids.

Mother Goat rescues her little goats from a wolf's belly. But her eldest son, Toruku, is missing! One day Mother Goat brings "Toruku" back home, and the little boy has to confront his own fears as well as the disfigured bodies of his brothers and sisters. As the wolf once again approaches, secrets of Toruku's absence come to light as the flock fights for survival.

What is revealed in the subversive narrative is a tragic, yet heartwarming story about a mother and her children dealing with, and recovering from, predatory abuse.

The short can be watched here