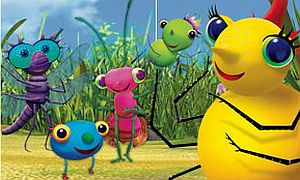 I guess you could say that they're... bug-eyed, am I right?
Advertisement:

Look at the eyes of your typical cartoon animal. More often than not they will not resemble those of the animal they are based upon. Instead, they have generic bright cartoony eyes placed forward on the head. These are vaguely humanlike with scleras, pupils, and sometimes colorful (often blue) irises. Sometimes the scleras will be a different colour, like yellow or green, (possibly to suggest 'wildness',) but since few animals other than humans have easily visible sclera at all, it's no more natural.

The sclerae on cartoon animals (including cartoon humans) will usually be much more easily visible than on real vertebrate animals and even real humans. The reason, of course, is to humanize the critters and make their facial expressions readable.

Of all animals, cats and snakes are most often exceptions to this rule, both having eerie green or yellow eyes with slit pupils. This absolutely has something to do with the Cats Are Mean and Reptiles Are Abhorrent tropes.

This can look downright weird where animals with eyes that are even less human-like are concerned. Where have you ever seen insects with recognizable pupils outside of cartoondom? Other than praying mantises

, which actually do seem to have pupils.

A variant of this trope is to draw animals which would have sideways-facing eyes in real life, with frontally placed eyes. note Most vertebrate animals' eyes (including rabbits' eyes) are placed on both sides of their heads. Predators tend to have forward-facing eyes, while the predated animals have their eyes sideways (for optimized 360-degree view). Most animals with forward-facing eyes, such as dogs, bears, hawks and eagles, have eyes somewhat more laterally placed than those of humans. Only owls, cats and primates (especially haplorrhine, or dry-nosed, primates) have eyes as forward facing as human eyes.

This trope tends to be a Necessary Weasel, to the extent that it can be found in downplayed form even in classical realism paintings, for a couple of reasons:

Firstly, it makes it easier to animate the animal(ish) character's eyes and facial expressions, and to convey their actual mood. The real-world facial expressions of horses, for instance, mostly involve subtle positioning of their ears and nostrils, with their eyes basically having various levels of "open" and "closed". To the uninitiated, this results in "angry" looking nearly identical to "happy", "scared", and "sees attractive mare". In many classical battlefield paintings, for instance, the freakishly exaggerated rolling eyes and furrowed eyebrows seen on horses are an intentional effort to avert the (seeming) Dissonant Serenity in the slightly-widened eyes of a panicking or enraged warhorse.

Secondly, it also helps avert a certain amount of the Uncanny Valley effect which can result from putting exaggerated expressions on the faces of many animals, particularly when seen from straight-on. Not employing this trope in such cases via things like Cheated Angles and adding eyebrow ridges to animals without them note such as kangaroos, some dog breeds, deer, rabbits and horses can look, to put it in technical terms, "damned freaky". note See also: Victorian taxidermists' ill-advised attempts to give whimsical expressions and large anthropomorphic eyes to taxidermied animals.

This seems to be related to Toothy Bird and Feather Fingers, in that it is a relatively slight Anthropomorphic Shift. The thing is, the vast majority of vertebrate animals in real-life have eyes that contain roughly the same anatomy as a human's. They just look somewhat different due to different specializations. Some artists are of the opinion that their animal characters should have more realistic (within reason) eyes, as many animal eyes simply look beautiful and cool.

Not to be confused with Sphere Eyes, Conjoined Eyes or Exposed Eyeballs as Eyes.

As this is such an Omnipresent Trope, instead of listing every cartoon character ever, we will list the...