Literature / The Wolf and the Seven Young Kids 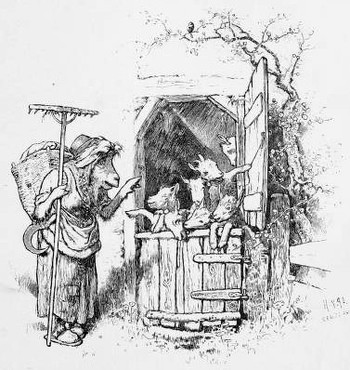 A mother goat leaves her seven little kids home alone before she goes out to get some food. She warns them not to open the door for anyone, especially not The Big Bad Wolf. Soon enough, after she leaves, the wolf tries to get in. He pretends to be their mother, but is betrayed by his gruff voice. The wolf leaves and returns a little later, this time using a sweet, light voice to impersonate their mother (in some versions having eaten chalk to make his voice highernote Chalk was thought to be a remedy for colds and hoarseness. There might also have been an association of white chalk = soft and light voice. In reality however, eating chalk has absolutely no effect on your voice, it will never even get into contact with your vocal chords. Don't Try This at Home). At first the seven little kids think it really is their mother, but then they ask her to stick her paw in front of the window (in some accounts they see it under a crack in the door) and notice his big, black feet. They refuse to open the door and the wolf leaves again, this time going to the bakery (in some versions, the miller) to whiten his paw in flour. He returns and fools the little kids because they see his white paw and think it's their mother. The wolf jumps into the house and gobbles up six of the seven kids – the youngest one is able to hide inside a large standing clock before he leaves. After his big meal, the wolf finds he is very, very tired, and so the first thing he decides to do is lie down against a tree and enjoy a good long nap.

When the mother goat returns, she discovers her house is a mess and finds her youngest kid inside the clock. He tells her what happened and they decide to go look for the wolf. They soon find him, still fast asleep, and the mother goat tells her youngest child to get a pair of scissors, a needle and some thread, with which they cut open the wolf's belly. The six goat children jump out, alive and well. Then the goats fill up the wolf's belly with rocks and the mother sews it back up again. The goats hide and the wolf finally wakes up, feeling thirsty. He goes to the well (in some versions, the river), but falls in and drowns under the weight of the rocks. And the goat family lived happily ever after.

While not gaining as much film or animated adaptations as Little Red Riding Hood and other stories by The Brothers Grimm. The story has been adapted into animations in the past, mostly in Japan where that fairy tale is very popular. The story was loosely adapted into animation with the 1957 Russian animated short, while receiving two live-action adaptations (the 1957 film from Germany which expands on the story, and a musical from 1976 called Mama/Rock'n'Roll Wolf).

The 2018 Japanese Stop Motion animated short My Little Goat by Tomoki Misato is a darker and more realistic take on the tale which takes place after the events of the story.

This fairy tale provides examples of: