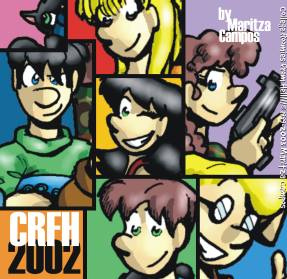 What was that sound just now? Oh, nothing, just the Freshman dorm exploding...

, formerly titled College Roomies From Hell!!!, is a Web Comic by Maritza Campos; it has run since 1999, and was one of the flagship series on the Keenspot

Three mismatched guys end up reluctantly rooming together when after showing up late to get a replacement apartment, and find themselves (and the three equally mismatched girls across the hall) thrown head-first into World of Weirdness, with super-powered mutations, Cthulhu, were-coyotes, genies, mad scientists, and oh yes, the imminent birth of the Anti-Christ, just for starters. To call this series strange is an understatement; yet somehow, despite a severe case of Cerebus Syndrome, it all seems to hang together and remain funny.