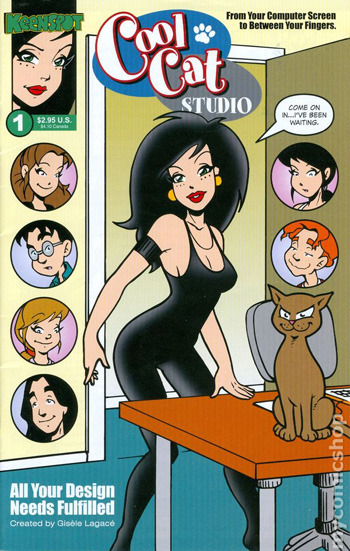 Okay, maybe there's some Fanservice.
Valerie: What's... real? I, I mean, how can logical deduction mean anything in a world where this kind of @#$% happens?
Advertisement:

Cool Cat Studio was a Webcomic created and drawn by "Giz" (Gisèle Lagacé), who also wrote it to begin with, before recruiting T Campbell to handle much of that duty. It started as a Slice of Life Work Com, evolving towards Romantic Comedy, before the creators shifted things radically into the realms of weird SF and the supernatural — while the more mundane interactions between members of the cast increasingly tended to Soap Opera. The shift was, perhaps predictably, unpopular with some fans.

The comic initially ran from 2001 to 2002 before being cancelled, leaving some plot strands dangling. Eventually, the creators got back together to wrap things up in a new run from 2007 to 2008.

The complete run of comic can be found starting here

. Note that some later strips are NSFW.