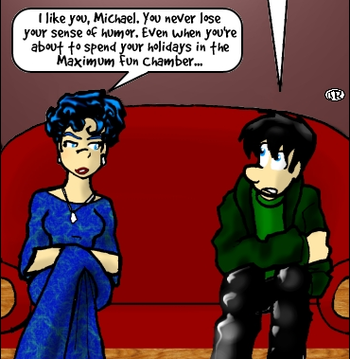 "Help! To do something, culling-season rejects, or to be pegged out in the pleasure pits!"
— Thilf, Pime Doesn't Cray

An unspecified threat so awful that mere mention of it makes the strong go pale and the weakhearted clutch their chest, used as a Running Gag in a humorous series. Usually, the Maximum Fun Chamber itself is never shown or described, with whatever it actually is being left to the imagination of the viewer; when and if it is finally shown, it is usually deflated as something innocuous — at least, until it is seen in action.

Named for Hazel Green's isolation cell in the Webcomic College Roomies from Hell!!! (which, ironically enough, is not only shown, but is a genuinely serious threat as well); the name originally came out of a forum in-joke which the author picked up on as a Shout-Out.

The Maximum Fun Chamber can be seen as a cross between Noodle Implements and Cool and Unusual Punishment: Take Our Word for It for torture. The opposite of this trope is To the Pain, where the threat is described at great length. If played seriously, it becomes Room 101. If the name of a city (or other geographic location) is used this way, that's a Place Worse Than Death.

Compare Sealed Room in the Middle of Nowhere.