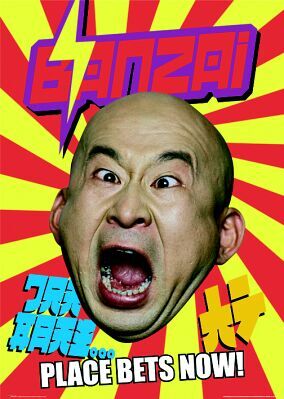 Play at home fun! From the land where anything is truly possible comes new gambling opportunity. Place your bets now, it's time to play... BANZAI!
Advertisement:

With random silliness, and featuring celebrity cameos during the bets, Banzai ran for four series from 2001 to 2004. In the United States, it had a brief run on FOX in 2003 (these were Americanized and removed references to British culture and celebrities) that was cancelled due to protest from Asian American groups after six episodes. Nevertheless, the show was then picked up by Comedy Central, who ran the rest of the series with no controversy.