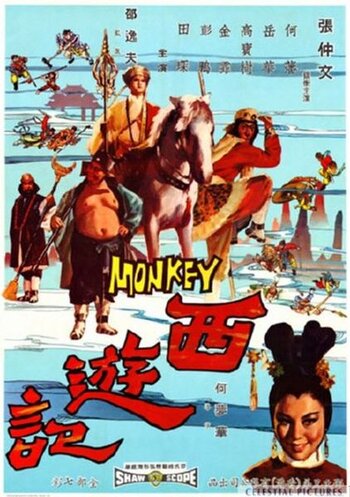 In the late 1960s, the higher-up at Shaw Brothers decides that they're ready to make their own adaptation of the classic novel Journey to the West, resulting in a tetralogy of films which is pretty much a Compressed Adaptation of the novel.

The Holy Monk, Triptaka / Xuan-zhang (Ho Fan) has been assigned by the heavens to travel from China to India to collect the Buddhist scriptures, but his journey will be a perilous one, as demons of all sorts are hunting him everywhere he goes, knowing that by consuming Xuan-zhang's flesh they will become immortal and invincible. Luckily, Xuan-zhang isn't travelling alone — his disciples Sun Wukong the Monkey King (Chow Lung-Cheung, and later Yueh Hua), Pigsy / Cho Hakkai (Peng Peng) and Sandy / Sha Wujing (Tien Shun) are around to defend him from demons of all sorts.

Four movies are made in the series:

The Tetralogy of Movies contains Examples of the Following Tropes: