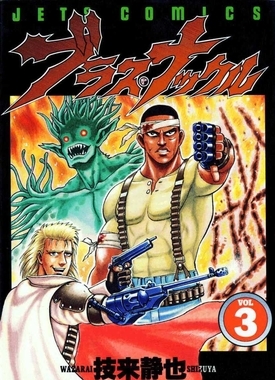 Blaster Knuckle is a manga by Shizuya Wazarai. Set in America in the 1880's, this series takes place in an alternate history where The Klan are actually flesh-eating demons, using the racism of the time as an excuse to hunt and eat black people. One man named Victor "Bloody Rain" Freeman knows their secret and has made it his quest to hunt down and kill as many as possible. To do so, he uses the titular Blaster Knuckle, a modified gauntlet that shoots silver bullets on contact. However, the demons only change shape at night, and turn back in the morning without anybody knowing better.

Blaster Knuckle ran for a short 20 chapters and was then discontinued. Still a fun read for mindless action.

It's also interesting to note that Wazarai was good friends with Kentaro Miura in high school. Yes, that Miura.

See also: Lovecraft Country, for a slightly more sedate take on the concept of supernatural monsters exploiting old-fashioned American racism for their own nefarious ends.