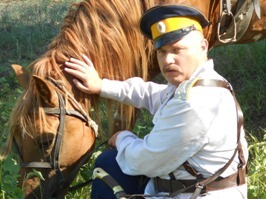 Andrei Olegovich Belyanin (born 24 January 1967) is a Russian Science Fiction and Fantasy writer. Most of his novels are known for humor and parody. Oftentimes, the novels involve Time Travel and feature a hearty dose of Anachronism Stew. The author is also quick to subvert the typical fantasy notions of Light and Dark, pointing out that Light Is Not Good and Dark Is Not Evil. Belyanin is also known for translating certain foreign works into Russian.
Advertisement:

A tragedy struck the author in 2004, when his son was kidnapped for ransom. While the culprits were arrested a few days later, Belyanin's son was killed the day of the kidnapping. Despite this, the author continues to write in his usual style.