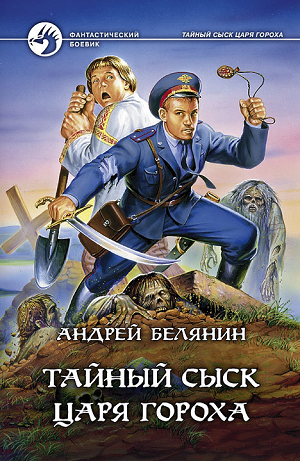 Tsar Gorokh's Detective Agency (Тайный сыск царя Гороха, Tainyi sysk tsarya Gorokha) is a series of novels by the Russian fantasy author Andrei Belyanin. Like all his other works, the series is full of deliberate anachronisms, magic, and humor. The protagonist of the series, Mladshiy Leytenant (Third Lieutenant) Nikita Ivashov, is a modern-day Russian fresh-out-of-the-academy policeman. One day, during field training in an abandoned village, he enters a hut's basement, which someone immediately shuts on him. After getting out, he finds himself in a Medieval Russian city called Lukoshkino ruled by the strict but just Tsar Gorokh. After explaining who he is to the Tsar, Nikita is asked to head the first Russian detective agency using modern investigative techniques (technically, the wording used for the agency better translates as Secret Police, but Nikita's job description is exactly what you would expect a police detective to do). Setting up his office in the home of Baba Yaga, whom he recruits as an expert on forensics and all things magical (thanks to her criminal past), he is also given a simple-minded village boy named Dmitriy "Mitka" Lobov, as a "junior associate". Being a clear example of both Dumb Muscle and Mother Russia Makes You Strong (apparently, he bends horseshoes with his bare hands for fun), Mitka frequently creates more problems than he solves. In later books, he is also given a company of Tsar's streltsy (guards) under Sotnik (commander of 100) Foma Yeremeyev to add manpower to the agency.

In a typical fashion, seemingly small cases usually unravel into huge conspiracies, frequently leading back to a single Diabolical Mastermind named Koschei the Deathless. In fact, it's usually a surprise when a conspiracy doesn't lead back to him.

The initially strict Tsar quickly mellows out to Nikita and considers him a good friend, although, when necessary, he reminds the detective who the autocrat is. However, the boyars (noble advisors) consider Nikita to be an upstart, especially since he doesn't recognize their Blue Blood and occasionally treats them as much suspects as any peasant. Another enemy of Nikita in Lukoshkino is Deacon Filimon Gruzdev, a low-ranking member of the church who also serves as the Tsar's scribe (being one of the few who can read and write).

The series consists of 10 novels and is the author's longest running series:

The books contain examples of the following tropes: