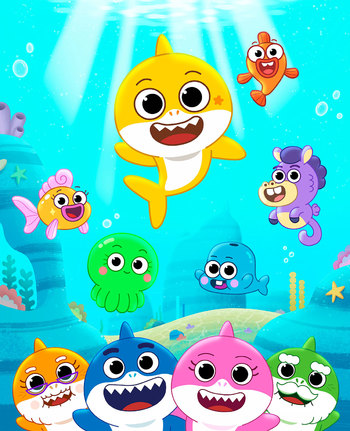 was short-lived.) This time around, the show is a collaboration between South Korean company SmartStudy (the owner of Pinkfong) and Nickelodeon. The show airs on EBS, or the Educational Broadcasting System, in South Korea and Nick Jr. in the United States. It is headed by Gary DiRaffaele, the creator of Breadwinners.
Advertisement:

The show focuses on the titular Baby Shark (Kimiko Glenn), a young shark who lives in the underwater town of Carnivore Cove with his parents, Mommy Shark (Natasha Rothwell) and Daddy Shark (Eric Edelstein), and his grandparents Grandma Shark (Debra Wilson) and Grandpa Shark (Patrick Warburton). Along with his best friend William (Luke Youngblood), Baby Shark has a variety of adventures, while making new friends and singing songs along the way.

The first episode, the Christmas special "All I Want For Fishmas", debuted in December 2020, with the show proper debuting in March 2021. In anticipation for the release, "Baby Shark's Big Show Shorts", a collection of two-minute shorts, were released in February 2021. A second season was announced on July 30, 2021, as well as a feature film in development.

The theme to Baby Shark's Big Show uses a rerecorded and modified version of the Baby Shark theme.

The theme to Baby Shark's Big Show uses a rerecorded and modified version of the Baby Shark theme.