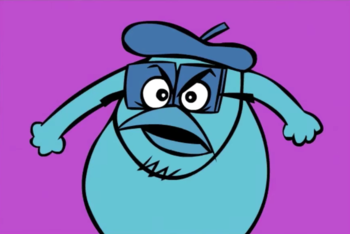 B. Happy was a four-episode Web Video series and one of the first in a line of Web Premiere Toons that were produced by Funny Garbage specifically for Cartoon Network's website. The series - which was an early example of Adobe Flash animation - follows the title character B. Happy, the Bluebird of Happiness, who is summoned by the Goddess of Happiness, Maureen, to go down to Earth and deal with situations in which something or someone is miserable, and see if they are deserving of happiness. B. Happy - who is much more of a cynical Deadpan Snarker - does so out of reluctance, and each episode, has to go through the agony of laying the Egg of Justice, which determines the outcome of the plight.

One of the features of this series was an interactive feature called Click-O-Rama, in which the viewer could determine the outcome of the situation of each episode, as in should the person in distress be bestowed happiness or not, and depending on which selection is chosen, B. Happy will either be rewarded for making the correct decision, or face consequences for making the wrong decision (which he then berates the "computer geeks" for misleading him). Other Click-O-Rama options would be spread throughout each cartoon as for, sometimes either related to the story (for example, one episode has a French artist who falls into a crying fit over accidentally ruining his painting when he hiccups, and a selection is available for you to rewatch his fit), or completely random (such as a brief insert of Hokey Wolf saying, "Stop thief, come back with my sheep.")

This Web Premiere Toon was first made available on Cartoon Network's website in 1999, and was featured up until 2003, when it and other older Web Premiere Toons disappeared. Currently, they have been archived and are available here: http://www.skyetheguy.com/WPT/index3.html

, but they have only the good endings.

Note: Because this was an interactive series, and each episode's outcome depends on the viewer's choice, many examples below have been marked with spoilers.