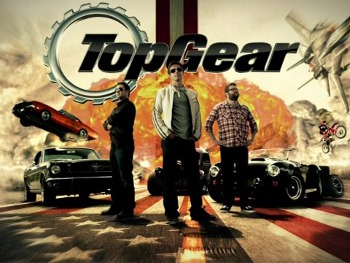 Adam "The Wrecker" Ferrara, Tanner "The Driver" Foust, and Rutledge "The Expert" Wood.
"I know, the rest of the world thinks Americans are arrogant. And, to be fair, fuck you."
— Adam Ferrara
Advertisement:

Take a British show about cars, all kinds of cars, especially cool cars. Then transplant it to America, where the car isn't just a vehicle, but a part of the national identity, a symbol of personal freedom and expression, and an integral aspect of daily life for most of the country. What do you get?

The show was originally to be developed by NBC (with help from BBC America) but spent years in Development Hell before changing hands from NBC to The History Channel and finally premiered in September 2010. It is hosted by rally-car driver Tanner Foust, racing analyst Rutledge Wood, and comedian Adam Ferrara.

Season 1 was a near carbon-copy of the BBC show it is based on with in-studio news segments, Stig power laps, and "Big Star, Small Car" (the US version of "Star in a Reasonably Priced Car"). By Season 2, however, most of the studio segments were dropped in favor of spending more time on field segments (only "Big Star, Small Car" and the accompanying interview remained). Beginning from Season 3, all studio segments were dropped in favor of full episode-long challenges, or a competition between the three hosts for the right to test a cool car. The Stig would only make occasional appearances, mostly to set a standard for the hosts to beat in challenges.

The show was cancelled after six seasons when its contract with the History Channel ran out in 2016. BBC America announced, in 2017, that it would be launching its own version of Top Gear with William Fichtner, Tom Ford and Antron Brown as the presenters. Top Gear America (as this version was called) aired its eight-episode first season from July 30 to September 17, 2017, but in 2019 it was announced that it would be rebooted with Dax Shepard, Rob Corddry, and Jethro Bovingdon as the hosts. This rebooted version of Top Gear America, whose production was delayed by the COVID-19 Pandemic, began airing on the Motor Trend network's app on January 29, 2021.

Not to be confused with yet another adaptation of Top Gear that was short-lived on Discovery Channel (a re-edited version of the original's episodes with Jeremy, Richard and James filming new, America-specific interstitial segments). Compare to other American automotive magazine shows: Car and Driver, Motor Trend and Motor Week.