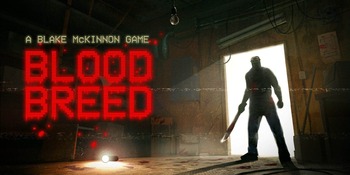 Blood Breed is a Retraux Survival Horror Video Game by Blake McKinnon, who had previously made Dead County.

In the game, you play as a woman who's driving along the road one night when your car hits a deer. Seems the crash did a number on your car, as instead of trying to start it up again, or tend to the wounded (possibly dead) deer on the road, she instead decides to check out the nearby Killamoor Meat Works.

Interesting thing about that place. Seems that one year ago today, the owner of the abbatoir, who was a disgraced biologist, massacred his whole staff with the help of his son. Neither of them were caught, though. At least that was what your car radio said. So... no points for guessing where this is going.